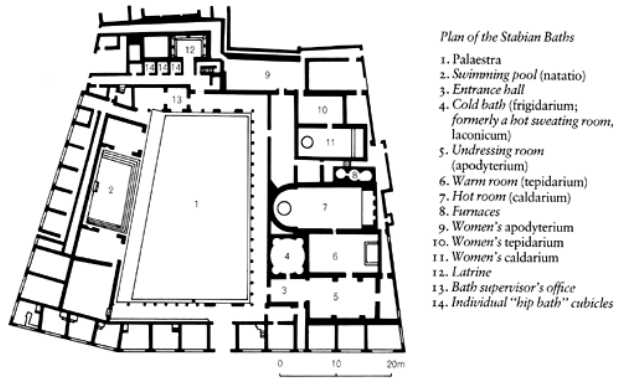 Layout of Stabian Baths in Pompeii
Attending baths in Pompeii was once an essential part of a Romans daily routine since before the 1st Century BC and shows the importance of bathing in public facilities. There are three main baths found in the city of Pompeii, the Forum, the Stabian, and the Central baths. The biggest and oldest of the three is the Stabian Baths, located on the corner of Pompeii's two main streets. Unfortunately, due to the 62AD earthquake, causing extensive damage, only the Women's Quarters on the North East corner was in use during the Mount Vesuvius eruption in 79AD. Baths in Ancient Roman times was a place that, with a small sum, you could relax, meet friends, go to the gym, play games, have a good meal, and spend a great deal of time in a series cold, tepid, warm or hot baths. The great popularity in the baths caused it to become a significant part of daily life for Romans in Pompeii.

The main bathing complex is found to the east of the Palaestra, dividing into 2 sections, male and female as the men and women in the Ancient World were forbidden to bathe together. These divisions contain the same type of rooms as each other, only the male side is much more elaborately decorated than the girls. These rooms include, the Apodyterium - The changing room, the Tepidarium - The warm room, the Caldarium - The hot room, and finally the Frigidarium - The cold room.
The male Apodyterium has seating along the sides of the square room, with a row of niches along one wall to store the bathers outside clothing. The floors are made up of rectangular grey slabs of marble, with the walls edged with large blocks of basalt. The walls are painted a plain white colour which contrasts beautifully with the vaulted ceiling that is elaborately decorated with polychrome stuccoes showing great detail of 3-Dimensional cupids, rosettes, trophies and figures representing the God of Bacchic[1]. The female Apodyterium is the most well preserved rooms in this bath house compared to the males. The walls again are lined with benches and have niches to hold clothing of the bather above them. The floor of this changing room is quite different to the males as it is red glazed and lozenge shaped. The walls are coated with a smooth white plaster known as stucco[2].
Males walk through the North side of the Apodyterium to get to the next two rooms involved in the bathing process, the Tepidarium and the Caldarium. Each of these rooms are in extremely poor shape due to the 62AD earthquake and the 79AD eruption. The floors in both of these rooms that contain warm baths and hot baths are raised up with the support of Susupensurae which provided a passageway for the circulating hot air, heating the rooms[3]. To Finish off their baths, the men would go through the changing rooms and into the Frigidarium to take a plunge in the icy cold white marble basin located in the centre of the room[5]. The room itself is circular, painted yellow with green branches. Some claim that after this bath, they felt stronger and more supple in their limbs.
The women enter their Tepidarium on the southeast side of the Apodyterium which has survived much better than the male equivalent. The Caldarium has a vaulted ceiling with panelled red walls between stucco pilarster columns[4]. Since the women's bath didn't have a separate  Frigidarium like the males, a large Basin for cold water was used at the western end of the Apodyterium to compensate.

The baths in Ancient times was an important and essential part in Roman Pomeians daily life and were visited on a daily basis in order to socialize with others. From this evidence, I am able to see this clearly as the baths were able to be used by any social class whether you are a slave or wealthy. It was a way for the Pompeians to socialize and relax, eating food, exercising and even requiring prostitutes for sexual pleasures. The division between male and female baths within the same building tell us a lot about how women were thought of by men. Women were considered lower than slaves and it was forbidden to bathe together unless a male has required a prostitute. Even the rooms within the Stabian Baths show how the women were thought of with extremely plain coloured walls and floors with little to no decoration, compared to the males elaborate decorations and polychrome stuccoes along the walls and ceilings. Sex was evident in these baths with many erotic frescoes depicting oral sexual activities. This expresses the Pompeians view on sex in ancient times, and how they have incorporated it into nearly all aspects of their life. These ideas towards sex today are dramatically different due to the Christian Church seeing and sexual act as a sin, whereas the Romans at this time, for example, saw the fallace as a symbol of fertility and good luck. The life in the early 1st Century BC for Romans was extremely expressive with erotic statues, frescoes and objects seen in every part of daily life. The Romans at this time would have been very social, and this is evident by the daily usage of the baths, amphitheatre and forum where you would meet and socialize. 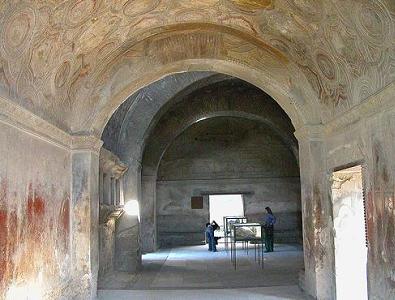 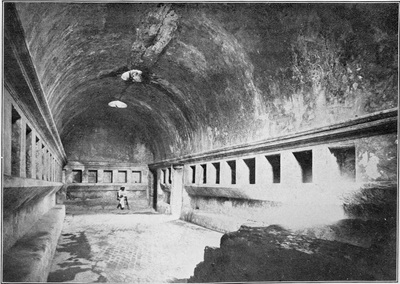 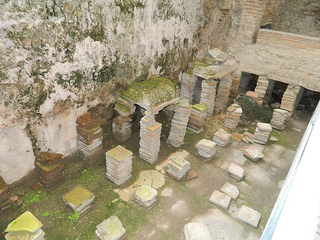 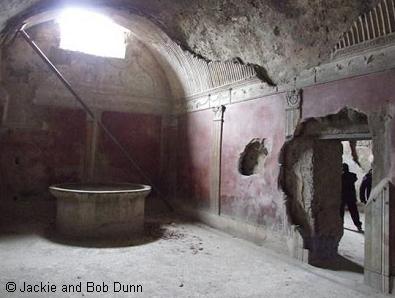 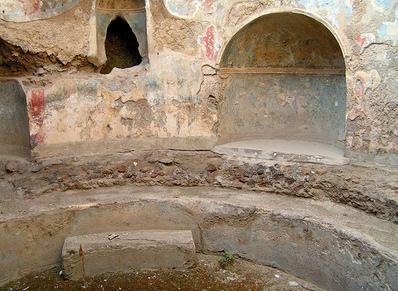